Swarovski: The Secret To VS Fashion Show
Categories

Posted by Har-Man Importing on 1/29/2015 to Fashion & Trends
Share |
It is the middle of the winter. Days are short. The air is cold. Most of us are wrapped up in snuggies binge-watching Netflix and waiting for the mercury climb above freezing. There is a glimmer of hope in this dark and dreary landscape though – the Victoria’s Secret Fashion Show! We can’t think of a better way to warm-up (and stick to our New Year’s resolutions!) than to discuss the red hot fashions featured during the fashion giant’s December 2014 show. For the past 12 years, Swarovski has collaborated with Victoria’s Secret to make their show sparkle more and enhance the WOW factor! Of course the models are gorgeous, but “OMG!” – the designs embellished with Swarovski crystals are stunning!
There is no doubt that the Victoria’s Secret Fashion Show IS where lingerie meets couture. Inspired by Truman Capote’s legendary “Black & White” masquerade ball, the 2014 show used more crystals in costume design than previous years. The show featured different themes, such as Fairy Tale (Tinkerbell-inspired); Guilded Angel (opulent gold leaf and intricate beading); Spicy Adventure (Bejewled Asian inspired); Urban Pink (graffiti prints); Dream Girl (Fifties pin-up and high end boudoir) and Angel Ball (sophisticated monochrome looks).
The absolute highlight for Swarovski crystal devotees, however, was the “The Swarovski Look.” Part of the Fairy Tale theme collection and modeled by Lily Donaldson, the costume was embellished with over 150,000 Swarovski crystals and weighed over 88 pounds! While 29 different designs featured Swarvoski crystals, we think this angel-winged look is the piece de resistance of the entire show. Up and coming Parisian designer, Serkan Cura, is the creative genius behind this piece (pictured below). 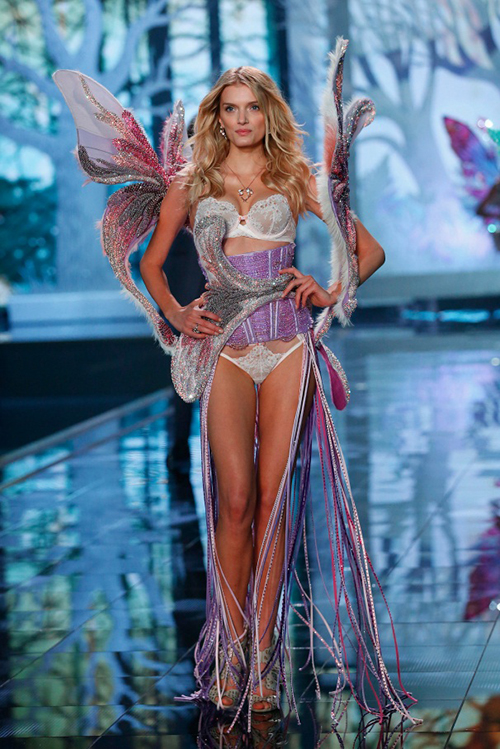 (Image courtesy of Swarovski)
There is a wonderful YouTube video with Serkan Cura in the Swarovski Creative Design Center in New York City explaining his inspiration and how we puts together such amazing designs. Now, we realize that we don’t live in Victoria’s Secret Fairy Tale World, although, let’s be honest, it would be very nice. Victoria’s Secret DOES make a Designer Collection embellished with Swarovski crystals for us, non-fairy simple folk. So, you can still get a part of this crystallized collection – if you are willing to part with your snuggie. And who’s to say you can’t get inspired and make your own crystallized lingerie collection? (The 2014 Victoria’s Secret Fashion Show was held at the Earl’s Court Exhibition Centre in London and aired on CBS on December 10, 2014.)
Did you watch the show? If so, what was your favorite design?
Information
Browse by Category
Quick View